On the road again!  Two weeks ago we left the coast heading - well, anywhere to escape the smoke.  Our plans changed on a daily basis as we evaluated our options.   Initially we headed north and west, choosing the Chilcotin route towards Bella Coola, novel to us.  Even that far north there was ample evidence of smoke; turns out "you can run but you can't hide".  Not overwhelming smoke, but plenty of evidence of the fires of 2015 and 2017, reminding us of the 2020 fires just to the south. 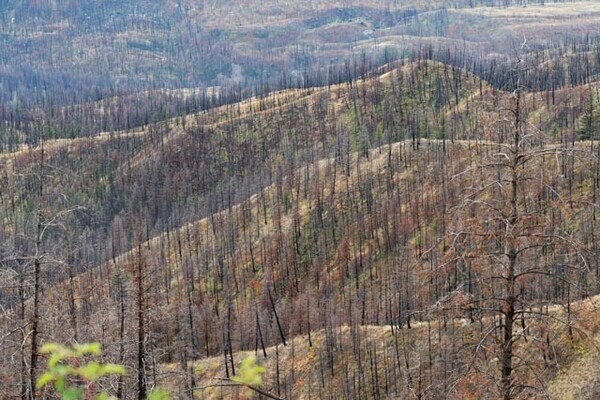 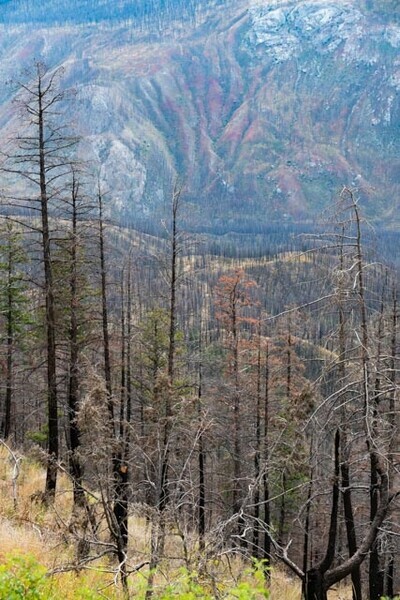 Choosing RV sites, we were lured into Puntzi Lake with the promise of a bakery at the campsite - a little unexpected 'in the middle of nowhere'!  A second surprise was the discovery that white pelicans call Puntzi Lake home in July and August before migration to more hospitable climes. 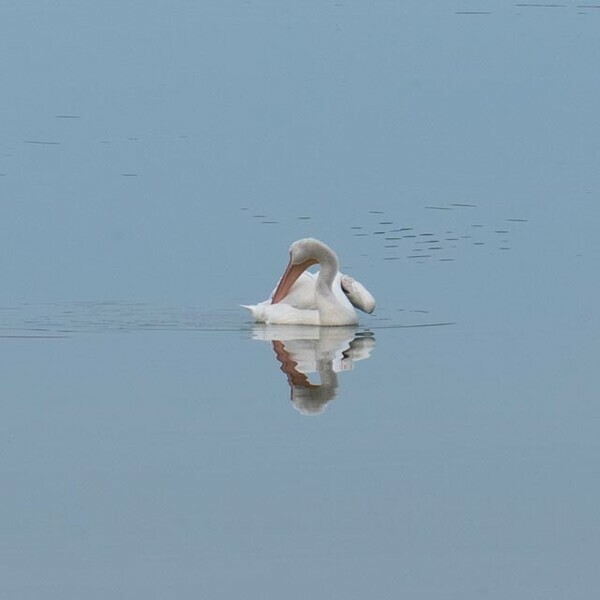 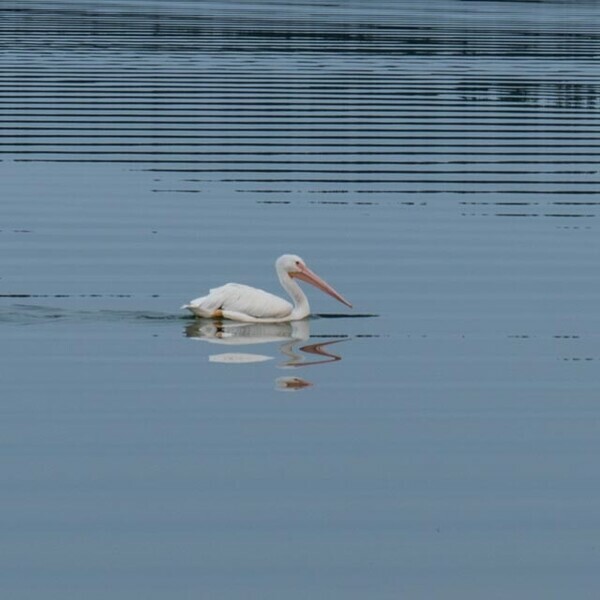 One of the pleasures of travel in the province is seeing changes in the vegetation. The "trembling aspens" and pine forests offer a beauty distinct from coastal cedar, oak, and arbutus. 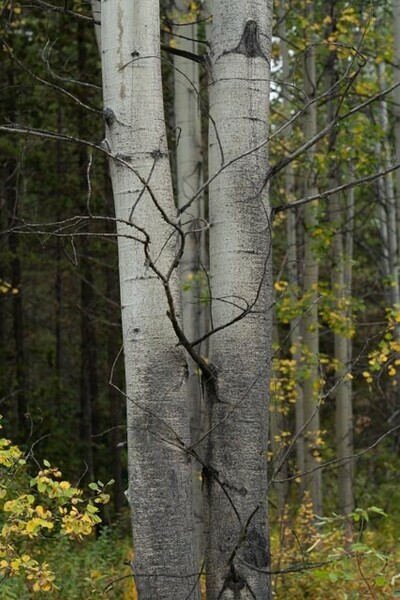 We found the winding, ice-turquoise Chilcotin River spell-binding, softening as it does the stark sculpted desert walls and dunes that descend sharply to the water's edge. 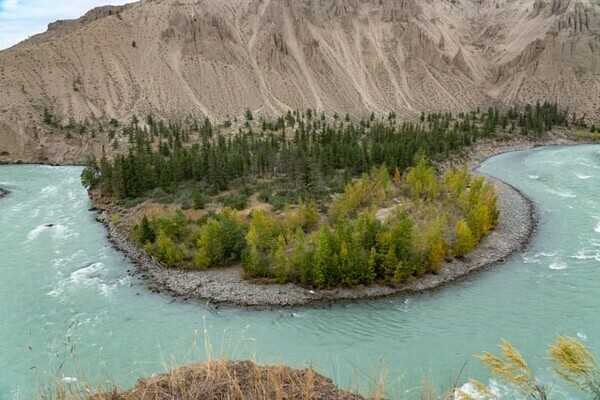 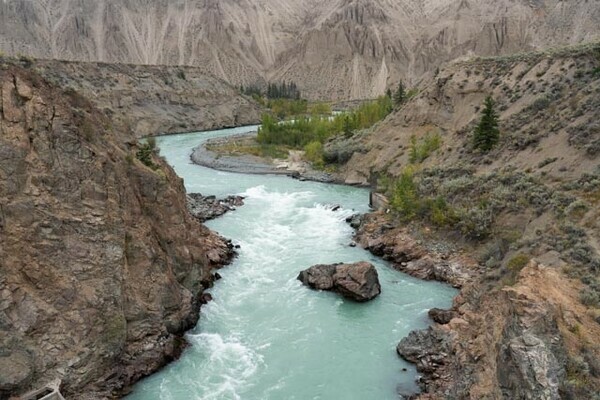 Smoke obscured the glacier-covered mountains that line the route to the remote coast.  Forty kilometres from Mt. Waddington, the highest peak in British Columbia, we were unable to discern even an outline.  As we u-turned east and back-tracked to Williams Lake, we vowed to return to Chilcotin country someday.

It was illuminating to post-process images taken through smoke. I discovered that we could all use a personal 'dehaze filter'!  Magically the processing filter allowed us to "see what we couldn't see".  Below is what we 'really' saw followed by the same image processed using Lightroom's dehaze filter.  Unfortunately the filter did not remove debris from the windscreen, 'dehazng' rendering both distant mountains and spots on the windshield more visible. 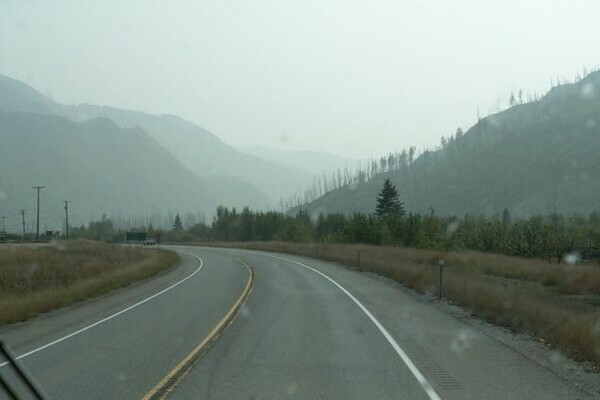 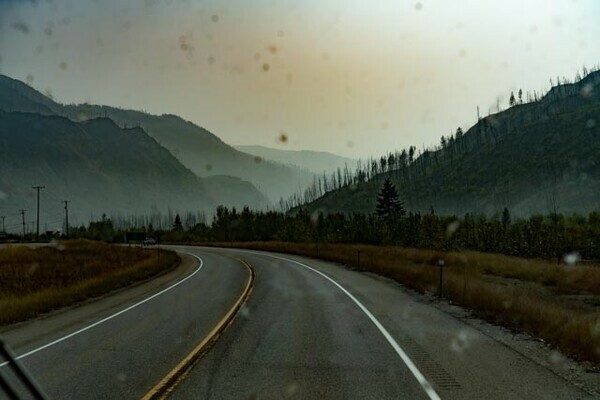 Hopscotching as we were around the province, we sometimes found fall before we found summer. 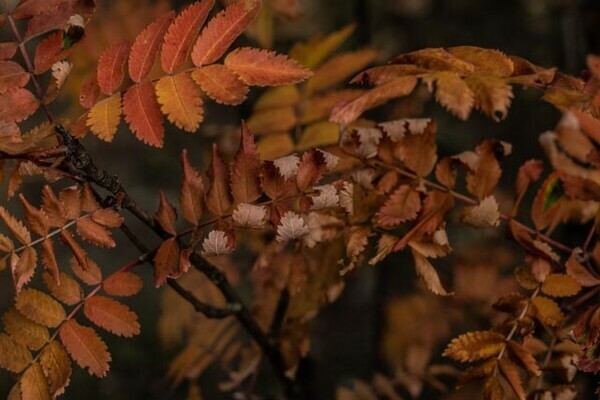 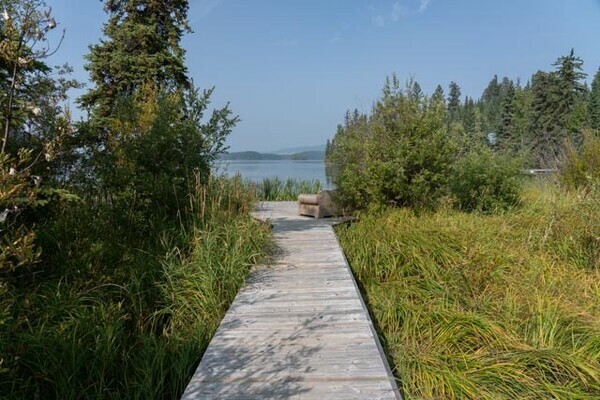 From Williams Lake we headed east towards Revelstoke, the route lined with lake after lake after lake.  Among them, Bridge Lake, above, where a couch invited visitors to the end of the boardwalk, and, below, Shuswap Lake where, ironically, smoke be damned, we made our own fire! 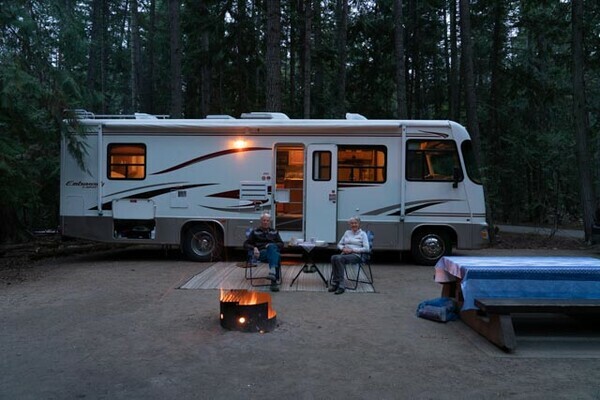 Many of the lakes were obscured almost totally by smoke; others, like this one, allowed us a peek at their magnetic and majestic beauty. 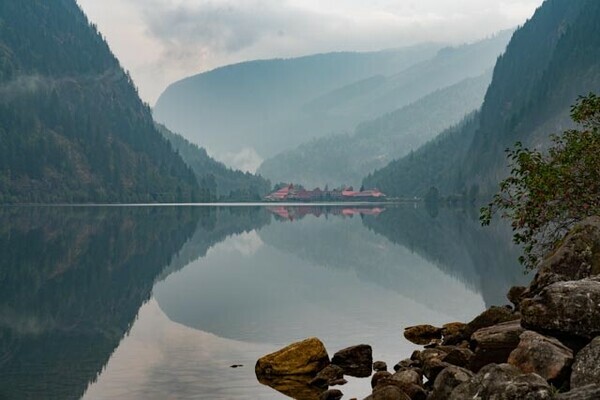 Fortunately the distance across the Arrow Lakes is not far; the captain of the Galena Bay ferry was able to navigate safely through dense smoke.  Maybe she uses a dehaze filter! 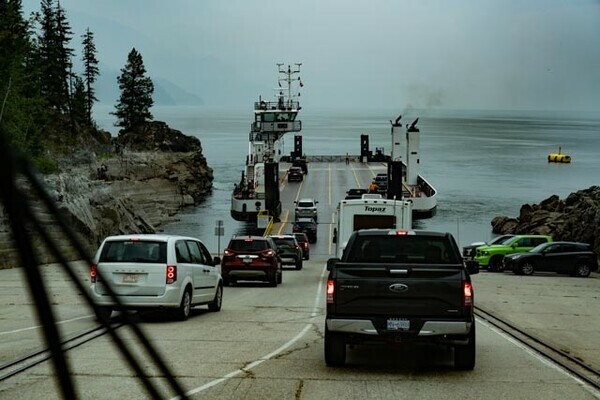 We camped 16 miles south of Nakusp on Arrow Lake, its capricious moods changing with the weather.  Smoke was beginning to dissipate and the sight of fog and clouds was welcome. 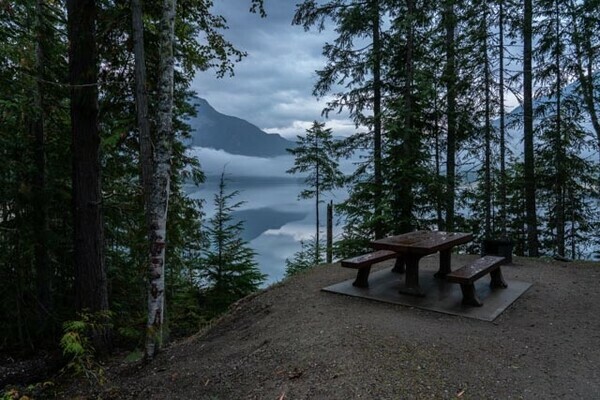 West along southern BC route 3 the change to undulating desert brought sure signs of fall including beautiful grasses, pine trees, and more trembling aspens. 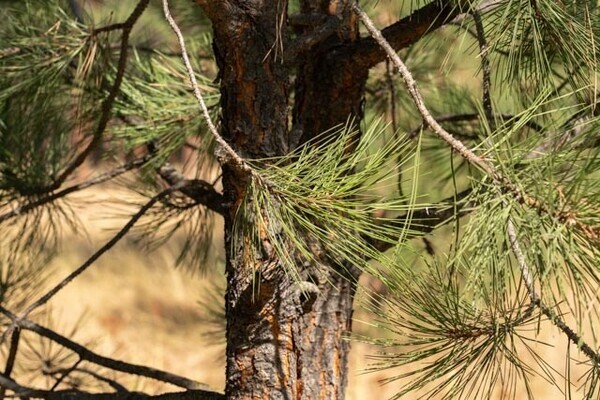 The Kettle Valley Rail (KVR) Trail and the Columbia & Western Rail Trail extends from Hope to Castlegar.  The trestle mirrored in the Kettle River below is part of the decommissioned track, now home to an extensive recreational trail providing almost 650 km (400 mi) of connected hiking and biking pathways. 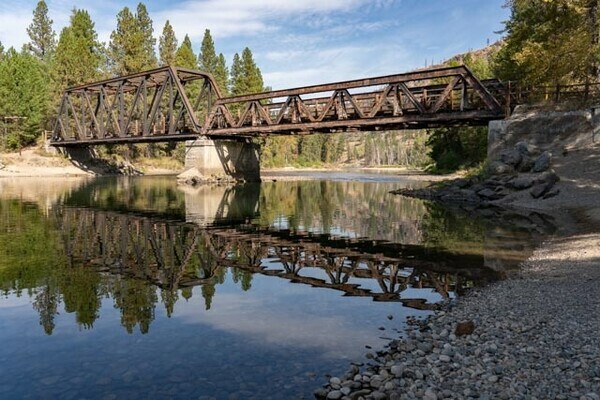 From there we chose to head north and west towards home: along the way, a dramatic peak, a climber's magnet, seen from Marble Canyon Provincial Park. 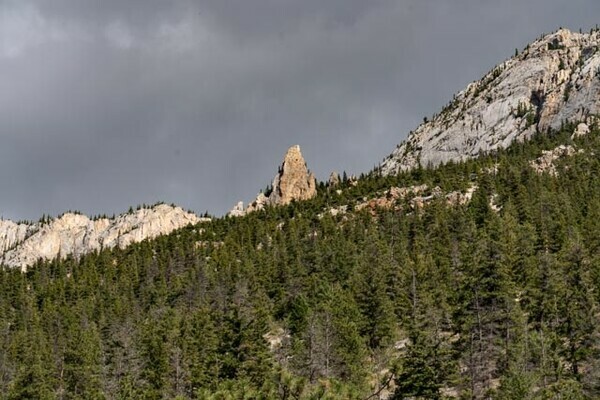 Along Duffy Lake road yesterday we were granted glimpses of snow-capped peaks through the cloud-laden valley of Cayoosh Creek.  The highway's a rewarding winding, hilly route; the prize once through to Pemberton is the thundering drama of Nairn Falls. 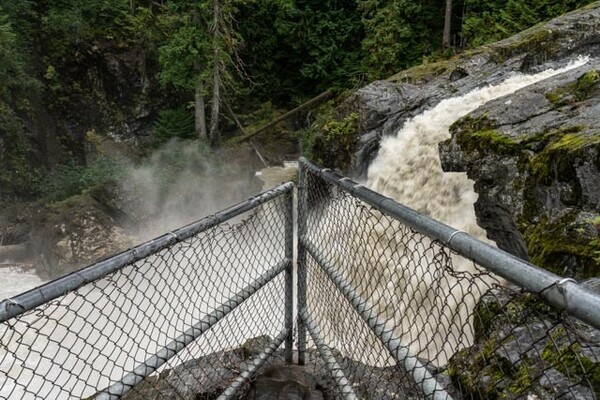 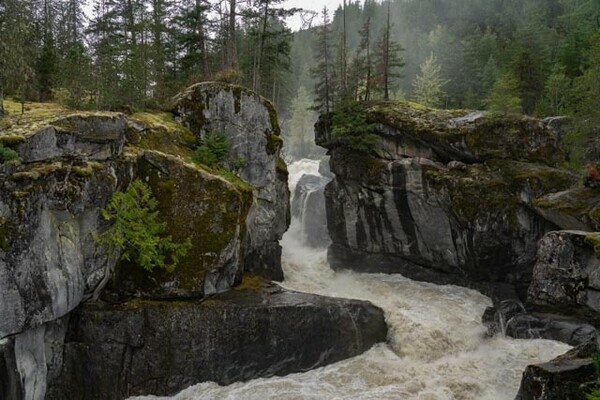 And then, Whistler.  In contrast to the natural architecture of the river, the Audain Museum - an architectural beauty befitting the marvellous Canadian artwork collection housed within.  Emily Carr and EJ Hughes, along with wonderful Northwest Coast masks are highlights. 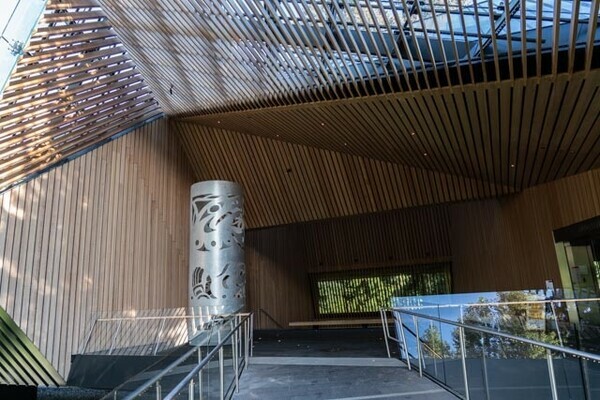 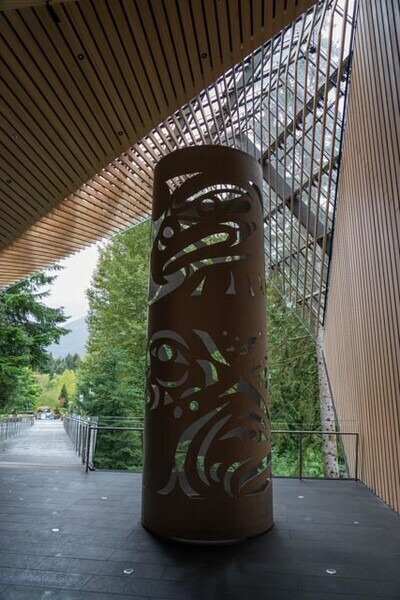 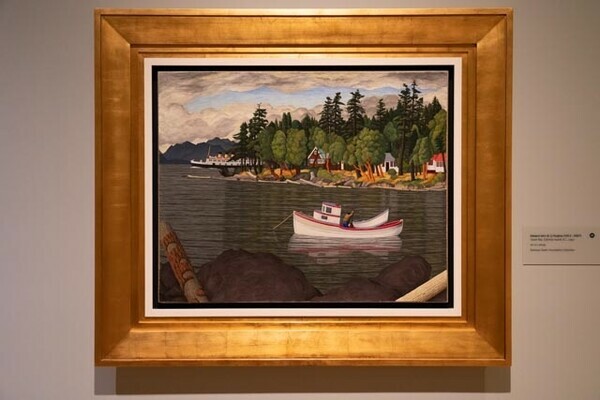 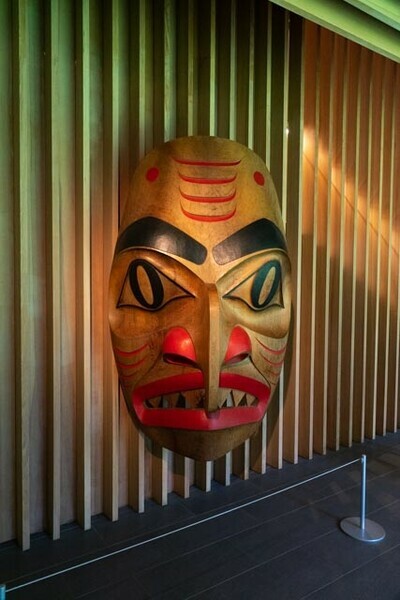 Satiated and feeling fortunate, we return home this weekend having managed to avoid considerable smoke and the first significant storm of the season!